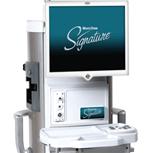 Treatment > phacoemulsification apparatus
The AMO Signature Phako device (with the latest White Star Ice/Case software) is used to remove the natural crystalline lens in cataract operations (blurred lens) and when exchanging the clear crystalline lens for refractive purposes (clear lens).
With a probe that vibrates 20,000 times per second, the device first emulsifies the crystalline lens and then aspirates the fragments.
The advantage of this method lies in the fact that the surgeon only has to make a very small incision in the eye. Sometimes, this incision is enlarged to be able to insert the artificial lens.
This method enables the wound to heal faster so the patient can resume his normal activities almost immediately after the operation. 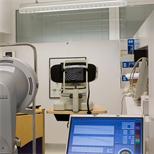 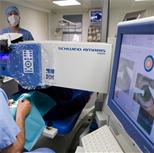 Treatment > laser excimer
The Schwind Amaris 750S is currently the most advanced and most innovative excimer laser on the market. In refractive surgery, this is the laser offering the greatest precision and greatest reliability.
It has a treatment frequency of 750 Hz. It has a six dimensional turbo eye-tracker (1050Hz) which tracks each movement of the eye using a high speed infrared camera operating at a frequency of 1050 images per second.
It has a 10 mm optical treatment area whereas other lasers only have 8mm. This reduces the risk of halos and other troublesome visual phenomena after laser treatment.
The laser enables customised treatments, either guided by topography or by wave fronts. The Schwind Amaris 750S takes the torsion of the eye into account (the rotation of the eye around its visual axis when the patient is lying down).
Due to this technology, vision quality is guaranteed after the operation, both for night vision and contrast vision. 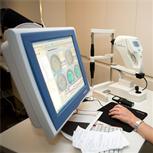 Examination > surface topographer
This device is an innovative type of topographer. One of its main advantages is that it does not require preliminary dilation of the pupil. Due to this device, even eyes which are deeply sunken in their sockets or small eyes can be measured.
The device maps the type and size of all optical abnormalities on the front of the corneal surface.
The tiniest irregularities are detected due to the analysis of more than 80,000 points.
Several images are compared with each measurement so that finally only the best image is used for treatment. 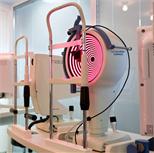 Examination > pupillometer, elevation topographer, camera scheimpflug
The Sirius is a very precise and multifunctional device as it combines a rotatable Scheimpflug camera (this is a camera in which the film holder and the lens can be moved and tilted separately) with a Placido disk (a disk pierced in its centre and composed of black and white concentric rings).
This “two in one” system enables a three dimensional study of the entire cornea (front and back parts), the anterior ocular segment, as well as a study of the complete corneal wave front.
The tiniest abnormalities can be detected due to the very high resolution analysis of more than 100,000 points. 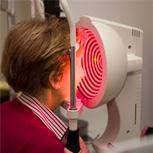 Examination > topographer
The purpose of the topography is to map the cornea. The WaveLight Topolyzer is fitted with a Placido disk (a disk pierced in its centre and composed of black and white concentric rings).
The surface of the cornea reflects the images or light rays. During topography the shape of the cornea is precisely measured.
The device measures the curvature of the cornea over more than 2000 points. This enables collecting numerous data on the cornea's refraction ability. 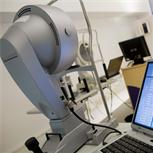 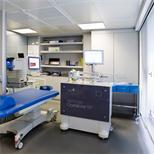