Ophthalmology, and eye surgery in particular, notched up some spectacular progress during the 20th century. And nothing suggests that situation is going to change in the 21st century. Quite the contrary.

We should note the combined outcome of scientific advances that continually improve our knowledge of the eye, its disorders and diseases, and the technology that provides increasingly effective measurement and treatment tools.

Some disorders that would generally have been hopeless cases in the past can be treated nowadays, with success-rates approaching 100%. Cataract operations provide a paradigm example of this. By reducing the risk of post-op complications to below 1%, it is now among the most routine of operations.

The cataract is a disease that has been known since ancient times. It is characterised by opacification of the natural cristalline lens within the eye that produces the convergence of the light’s rays on the retina. 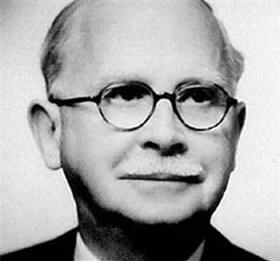 During World War 2, the English ophthalmologist Harold Ridley noted that the eyes of pilots affected by fragments of plexiglas from their cockpit failed to expel this material. By the end of the war, he had developed intra-ocular lenses designed to replace cristalline lenses afflicted by cataracts. In 1949, Ridley carried out the first implantation of lenses made of methyl polymethacrylate (the scientific term for plexiglas). The operation was not free of complications; for twenty years the ophthalmologist devoted most of his efforts to reducing the side-effects of fitting implants. This work was eventually rewarded with success, for by the late 1970s this technique had won general acceptance within the profession.

Since that time, developments in the fields of operating microscopes, laser surgery, also the improving quality of implants, have made it possible to reduce the discomforts of this treatment, also the ocular trauma intrinsic to this type of operation. In the 1960s and 70s, the fitting of lenses was still liable to result in corneal œdemas or glaucoma. However, extra-capsular extraction of the cristalline lens (which entails removing only the nucleus of the cristalline) would gradually replace intra-capsular extraction (removing the cristalline entirely), thereby reducing the size of the eye incision (it falls from approx. 13 mm to 7 mm). The logical consequence: by reducing the number of suture points, we also reduce their impact on vision and the duration of hospital stays. 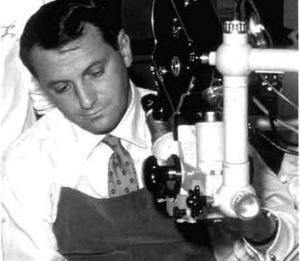 Impressed by the ultra-sounds of his dentist’s descaling/tooth-polishing machine, American ophthalmologist Charles Kelman attempted in 1967 to apply this technique to cataract operations. In so doing,Kelman developed phaco-emulsification by ultra-sound. This technique makes it feasible to fragment the nucleus before extracting it by inserting an ultra-sonic probe into the eye. Perfected over thirty years, this technique makes it possible to pierce the eye over just 3 millimetres. It would become completely feasible thanks to the progress made in the manufacture of intra-ocular lenses. When made of materials like acrylic and silicone, lenses can now be folded before the operation, fitted inside the eye and unfolded afterwards.

The effect of these new operating methods on treatment and outcomes was quite remarkable. Twenty years ago, a cataract operation was highly invasive, often requiring the patient to stay in hospital for up to a week. Nowadays, suture marks have become obsolete, and full recovery of vision after the operation has become possible thanks to the refractive options (vision correction) offered by modern lenses. New implants, be they multifocal, accommodating or toric, have gone on the market, offering many more correction options than traditional monofocal implants. From now on, this type of implant will also be used to correct the vision (in cases of serious visual deficits that are less simple to deal with by laser) enabling the patient to read without any correction. The arrival in 2010 of trifocal implants, making it possible simultaneously to have distance vision, close-up vision (40 centimetres) and medium-range (around 70 cm), demonstrates the huge advances achieved in this field.

Moreover, new methods of examining the eye make it possible to determine with ever-greater precision the strength of the implants required. Thus, ocular biometrics yield highly accurate measurements, while machines such as Zeiss IOLMaster can calculate axial length, corneal distortion and the depth of the interior chamber, accurately and without eye contact, using a low-intensity laser.

In the past, the operation took place under general anæsthetic, while more recently it was done under a local anæsthetic. This was done by applying an injection behind the ocular bulb, which entailed risks such as orbit hæmatomas, or damage to the optic nerve.

In the mid 1990s, a new type of anæsthestic arrived that uses drops, still known as a topical anæsthetic. This also amounted to a minor revolution. In Europe, Dr. Vryghem became one of the first surgeons to use it. Whereas previously refractive surgery operations required either a local or general anæsthetic, from then on a few drops deposited on the surface of the eye would suffice to render the cornea numb.

Quite apart from being painless, the benefits of this new technique are plain, though they do require the patient’s co-operation, as the eye is not immobilised. From that time on, it was no longer necessary to attend an appointment on an empty stomach; vision would be restored more rapidly after the operation, and the risks inherent in injections or general anæsthetics would be eliminated.

Arrival of the laser

Contrary to popular belief, operations to correct the vision are not all that new. Back in 1936, the Japanese doctor Tsutomu Sato attempted to make corneal incisions in order to reduce their curvature and improve the vision. In 1974, a famous Russian ophthalmologist who was known (and sometimes criticised) for his zeal for innovation, Sviatoslav Fiodorov, really developed this technique, known from then on as radial keratotomy. As often happens in ophthalmology, blind chance played a part in his research. Fiodorov had to look after a short -sighted child who was damaged in one eye by shards of glass from his spectacles after falling off his bicycle. In order to extract them, it was necessary to make a corneal incision. After recovery, the child realised he was now able to see much better than before!

Accordingly, Fiodorov refined this technique by making a greater or lesser number of incisions, always using even numbers, either closer or farther from the optic centre of the cornea, depending on the degree of shortsightedness. Throughout the1980s, he performed thousands of keratotomies, including on Red Army soldiers.

After going into politics at the start of the 1990s, this Russian ophthalmologist saw his technique gradually replaced by laser surgery. Coupled with advances in IT, laser technology offered greater safety in the operating theatre, plus an array of new surgery techniques. 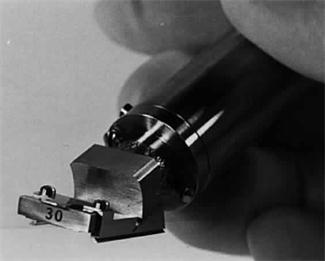 The roots of refractive surgery go back to the work of a Spanish ophthalmologist José Barraquer, nowadays dubbed ‘the father of modern refractive surgery’. In mid-20th century, he described the feasibility of removing or adding corneal tissue in order to mitigate vision issues. In 1963, Barraquer developed the microkeratomy, a sort of planing technique that made it possible to perform a keratomileusis (from the Greek keratos for cornea, and mileusis, cross). This involved removing the circular lamella from a patient’s cornea, freezing it instantly, and remoulding it in order to correct refraction problems. The lamella was then replaced as a lens.

This process was technically tricky and would often result in post-op complications. One of Barraquer’s pupils, Luis Ruiz, developed a mechanised microkeratomy, and began to operate on the cornea without extracting and freezing tissue. This was therefore an ‘in-situ’ operation, a term we find used in the name of the current refractive-surgery technique: Lasik, or Laser-assisted in-situ keratomileusis. Luis Ruiz’s method, known as lamellar keratoplasty, was widely used throughout the 1980s, in parallel with that made popular by the Russian Fiodorov. However, its results were inconsistent, and it was not suitable for all types of shortsightedness.

Throughout the 1960s and 70s there was much experimentation involving lasers in fields as diverse as IT, the plastics industry, also in military research.

The earliest laser used in ophthalmology was the Excimer, invented in 1973. In 1988, Professeur Seiler used it in Berlin to perform the photo-reactive Keratectomy (PRK), a new operating technique for shortsightedness, astigmatisms and longsightedness.

The method entailed removing a thin layer of corneal tissue at the surface (epithelium) and then remoulding the surface of the layer (known as the stroma) that makes up 90% of the cornea, using the Excimer Laser. In this way, each stroke of the Excimer made it possible to remove a piece of corneal tissue 500 times more slender than a human hair. After the operation, a few days were sufficient for repair of the epithelium.

While the PRK achieved (and continues to achieve) excellent results - 90% of patients regain 20/20 vision -, it soon gave way to another technique that was even less demanding as far as convalescence is concerned: the LASIK. The idea was now to plane down the upper layer of the cornea, but without removing it entirely (in this way one produces a flap, a sort of hood which can easily be replaced) before carrying out remodelling of the cornea through its entire depth, not just its surface. This makes it possible to prevent the inflammation that comes with all cornea-surface treatments.

Unlike the PRK, which may require up to three months until eyesight is fully recovered, plus several days for the epithelium to heal, the LASIK allows the patient to see, free of pain, practically the day after the operation!

Among the most recent and most significant developments in refractive surgery is without doubt the arrival of the Femtosecond Laser early this century. It is distinctive in that it emits ultra-short pulses (unlike a traditional laser, which emits radiation continuously), each pulse lasting just a femtoseconds - a millionth of a billionth of a second - hence its name.

The Femtosecond Laser is increasingly replacing the incision into the corneal flap with a mechanised microkeratomy. Its great advantage lies in its high level of accuracy, making it possible to operate on patients whose cornea would have been considered unsuitable for this type of intervention just a few years earlier (for example, too slender).

The Femtosecond Laser makes it possible to control cut thickness better, and to preview it easily.

Besides the major advances cited relating to cataract surgery and refractive surgery, ophthalmology has also seen significant advances in the fields of glaucoma treatment (increasingly effective eye-drops) and treatment of macular degeneration (injections have made it possible nowadays to contain some forms of macular degeneration) while also offering state-of-the-art solutions for keratoconus, a degenerative disease of the cornea, in which the eye progressively assumes a conical shape.

To prevent this situation from permanently distorting the vision, ophthalmologists use a new treatment: cross-linking. This is designed to strengthen the collagen inside the cornea by applying riboflavin (vitamin B2) drops, combined with a few minutes’ exposure to ultraviolet rays.

The past thirty years have seen some spectacular advances in eye surgery. Nowadays, the success-rate in treating detached retinas is in the region of 90%. The cataract has become an operation whose risk is close to zero. In the case of corneal grafts, there are fewer than 10% rejects, most of which can be treated. One serious disease that often goes undiagnosed is diabetic retinopathy, but this can now be treated by laser and stabilised in 8 out of 10 cases.

These results are the outcome of advances in science together with technology. But it’s also the active involvement on the part of numerous practitioners who drive progress in the discipline on the ground by accepting permanent change.

As far as the future is concerned, we shall surely be exploring research domains related to stem cells, gene therapy or even, in the longer term, by developing electronic processors capable of taking over the job of the retina.